The first half of 2021 was a very busy period for us when it comes to trailer video production. Hexy Studio specializes in 2D and 3D animation, and our videos are constantly getting better and more spectacular, which results in more and more quotation requests and orders. Over the last few months, we have prepared cool promotional videos for the biggest projects in the board gaming industry. As much as we specialize in trailers for purposes of crowdfunding campaigns, we sometimes cover games intended for release in a traditional model of distribution. These include two recent titles by the biggest publishers from Poland – Granna (Dwergar) and Rebel Studio (Meadow) in multiple language versions, with the latter’s script also created by our team.

Defcon 1 by Welldone Asyncron was a special project for us this year. The game by the French publisher was successfully funded on Kickstarter in March, but what was truly amazing about it happened before the campaign. Asyncron provided us with the best script ever! This file should be the benchmark for all publishers approaching us about trailer videos as for how to prepare the script so that the production team has no questions and can work quickly and smoothly.

We’re publishing it with Welldone Asyncron’s consent to show you how a perfect script for a trailer video looks like. See the PDF here.

Your script, sent to us to evaluate before getting back with a quote, should include the text for the voiceover and a description of what is to be shown on screen under each sentence – accompanied by the images of the game components and how they should move. Also, please record a video of a physical prototype (or screen capture from a platform for online gaming, like Tabletop Simulator or Tabletopia), explaining the movement of components! 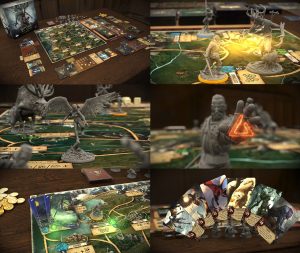 As for other videos for crowdfunding campaigns, these past months we have worked on a few small projects and two really big ones. We’re really proud to tell you that Mythic Battles: Ragnarok by Monolith Board Games and The Witcher: Old World by Go on Board both featured trailers by Hexy Studio, and collectively gathered over 10 million EUR of funding!

Speaking of The Witcher franchise – you must know that sometimes (rarely, but still) we make promo videos for other products than board games. This time CD Projekt Red ordered a complete service (full screenplay writing, 2D and 3D animation, music and sound effects) for an advert of their upcoming comic book, The Witcher Ronin, that has just been announced at the WitcherCon. And we’re all very satisfied with the result!