Check out the trailer video below and read how Battledrill came to life, how it changed over the years and what the whole thing is about 🙂

Star Scrappers: Battledrill is a fast-paced space western skirmish wargame in a unique Print3D’n’Play format. All content necessary to play the game is provided in a printable digital form. You don’t need to buy a physical rulebook, miniatures, cards or tokens, everything can be downloaded and printed out at your convenience from STL and PDF files. All 3D models are optimized for the most popular home-use 3D printing machines.

The story of Star Scrappers began a long time ago, Battledrill itself has been in development for 3 years now, and the upcoming KS campaign is the capstone of this long time’s work. The line of games in this setting began with the first board game we have ever released, Cave-in, designed by Filip Miłuński (CV, Destinies) and Jan Zalewski (Andromeda, CVlizations). It was successfully crowdfunded in 2017 and hit the shelves at board game stores in early 2018. Since then, we have been working on both expanding the lore of the universe and new mechanics to be included in the upcoming Star Scrappers games. One of them is still to come this year – Orbital was originally designed by the author of Terraforming Mars, the famous Jacob Fryxelius, and it got re-themed and artistically improved to fit the space western setting of Star Scrappers. Stay tuned! 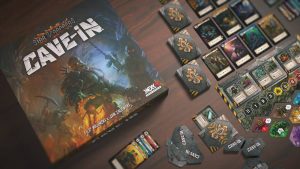 Now, getting back to Battledrill…

The last interstellar war between Terrons and Hy’drans broke out fifty years ago, now peace treaties are in power. Trade routes are set, civilizations flourish, but a new mysterious source of unlimited power has been discovered – the Hexis crystals. This has started a cascade of events that are going to change the image of the Galaxy. Proud Terrons and cunning Hy’drans have entered a technology race that can shake the space peace. Hiding since the war, the cybernetic Bioss have been seen near the inhabited worlds, the mechanical Metanels are arriving from deep space, and old inhabitants of ancient planets – Minegglers – once silent and distanced from politics, are now standing their ground to protect the energetic crystals. 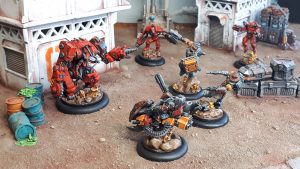 This is a short fragment of the background story for a skirmish wargame designed by our teammates, Wojciech Guzowski and Marek Raczyński (Hard City, Slyville: Jester’s Gambit). At its origin, it was intended as a traditional tabletop skirmish game, but the growing popularity of digital content for tabletop games and especially 3D printing, has convinced us to try a new, innovative approach – Print3D’n’Play. The Kickstarter campaign offers STL and PDF files containing everything you need to play the game, including 3D models of greatly detailed miniatures, at a price significantly reduced compared to a regular physical copy with exactly the same content! You play Battledrill using home-printed miniatures, stat cards, dice, measure widgets (or a measure tape) and a table that represents the battlefield of the skirmish between two opposing crews controlled by the players. Every model has a set of unique statistics and abilities, whose wise use is the key to victory. The players perform available actions with their miniatures, taking part in quick, dynamic, yet deeply tactical battles.

So, if you are into wargaming, miniature painting or just looking for cool minis and fantastic s-f artwork, subscribe now to get notified when the time for launch comes!